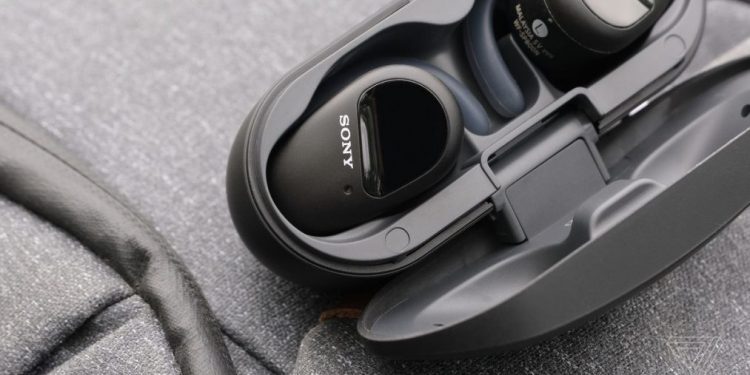 Sony’s noise-canceling WF-1000XM3 earbuds have been recognized as some of the best true wireless earbuds on the market ever since they were released. But that model lacks sweat/water resistance, that’s why they’re not really made for running or anything like that.

With the new WF-SP800N earbuds ($199.99) – they need a better name, seriously – Sony kept the noise cancellation, but there’s also proper IP55 certification now, so the earbuds have the feature of dust and water resistance, and even the battery life is extended to an incredible nine hours of constant listening (with ANC enabled). And the price is $30 lower than what the 1000XM3’s costed initially, even though you can probably buy those at a discounted price now.

The 800Ns don’t perform exactly the same as the 1000XM3s, and they still can’t be charged wirelessly or be paired with two devices at the same time. But they the bass is great, and they offer plenty of EQ fine-tuning, too. In contrast to Sony’s previous gym-focused earbuds, these have a better design that obvioulsly is borrowed from the 1000XM3s. On the outside, you’ll find a microphone and a touchpad for gesture controls. The touchpad is easy to find thanks to its glossy texture; besides, it’s bigger than the circular touchpad on the 1000XM3s. The right earbud is for tracking controls, while the left one controls toggling noise cancellation as well as ambient sound mode. Sony offers its well-known “Quick Attention” feature which allows you to temporarily boost outside noise to understand what’s happening around you. For this, you should hold your finger down on the left earbud.

There are three sizes of silicone ear tips with each pair of earbuds and two sizes of support arcs. You don’t need the arcs at all if the earbuds stay in your ears securely without them. People’s anotomy is different, and what’s comfortable for one person might not be for someone else, so they should be optional. Bear in mind that it’s not too difficult to tear the silicone ear fins, so be gentle. The drawback of the 800Ns is that they’re quite bulky compared to the Jaybird Vistas or second-gen Google Pixel Buds.

The charging case is quite big as well, not as big as Powerbeats Pro, of course, but definitely a step back from smaller options like the Pixel Buds, and Galaxy Buds, AirPods Pro that can fit into the tiniest pocket of your jeans. It only has enough power for one full charge. If you don’t need noise cancellation, Sony expects the buds to work around 13 hours without charge, and you get the same amount from the case. When noise canceling is on, both numbers fall to 9, which still very impressive for earbuds. Their no-frills case has a USB-C connector and one exterior LED to indicate charging status. This isn’t the best smart design choice, it started with Sony’s cheapest true wireless earbuds, the WF-XB700s. In those, the top of the case is see-through, so you can make sure the buds are charging as the red light gleams through. It’d be better if this was also the case with this model.

Similar to the recently introduced WF-XB700 buds, the latest model is tuned with the “Extra Bass” sound profile. The low end is surely the center of attention here. It should please those who are searching for a great workout soundtrack. The mids might be a little hollow, but this problem can be solved by the EQ controls in the company’s Headphones Connect app. The music you hear in 800Ns is full-bodied no matter if you’re listening to a lively running playlist or something quieter – everything comes through with satisfying clarity. Still, it doesn’t totally feel like you’re next to the instruments and here the 1000XM3 earbuds stand out. In terms of the most delightful sound among Sony’s earbuds, those are still much higher than the sportier 800Ns. However, the 1000XM3’s design isn’t for everyone, even more so if you need noise cancellation.

So, Sony’s WF-SP800N earbuds have got decent sweat resistance, great battery, as well as all the bass you need for the most intense workouts. Even if some features can’t match Sony’s best, they are still worth the money.