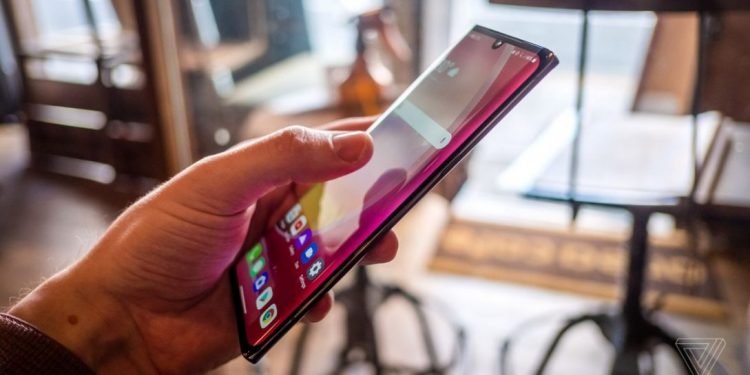 LG has followed extremely bland design patterns lately, which are used in an almost identical way by what seems like all of its recent phones. The G7, the G8, the V40, the V50, and others are all excellent devices in theory, but you can only tell them apart if you memorize their exact screen sizes and camera characteristics.

However, this approach doesn’t seem to be working. LG is clinging onto its remote third place in America, and it’s a non-entity in lots of other large markets.

Now we have the Velvet, a device that sees the company take a completely different approach to its standard idea of a flagship phone. That’s LG’s attempt to be taken more seriously in the sphere of design. The Velvet is a mid-range phone sold at a mid-range price but high-end fit and finish.

Almost every flagship Android phone coming out this year uses a Snapdragon 865 system-on-chip. Currently, it’s the fastest chip for Android phone manufacturers. The problem with the 865, however, is that there’s an integrated 5G modem, Qualcomm requires it to be matched with a separate 5G modem, and this takes up space and uses more power. This leads to 2020 5G phones being pretty thick and heavy.

The 765 isn’t as powerful as the 865, but it comes with an integrated 5G modem, giving the phone a more efficient design. So by sacrificing a tiny bit of performance, you’ll have a thinner phone that still works with new 5G networks.

Did it work? Well, the Velvet is by far the most beautiful phone that the company has created in many years – arguably ever. It’s exquisitely crafted, with a great sense of balance in its lines. Compared to most other recent Android flagships, its 7.9mm-thick frame looks much more modern.

It’s not something you can see clearly in the photos, especially in the “Aurora Gray” color. With this phone, you really need to hold it in your hand to get its appeal. For example, the symmetrically curved glass on the front and back isn’t a very innovative idea, but it gives you the sensation of thinness. That not to say that LG is breaking new ground in design. Nevertheless, it’s quite refreshing in contrast with today’s high-end phones.

The phone has a 6.8-inch 1080p OLED screen, a selfie camera notch, as well as slim bezels on the top and bottom. Because of this, the top edge is slightly thicker compared to other phones, but it’s necessary to balance out the bottom.

There are some issues with the screen, though. It runs at 60Hz, which is a step back from other premium Android phones coming out this year. A test also showed that the in-screen fingerprint sensor can sometimes be very slow and unreliable; it often required a second or even third press to authenticate.

The Velvet’s screen isn’t ground-breaking, but that’s OK because you get two of them at once. The phone ships with a new Dual Screen accessory, which is a great way to multitask. We’ve seen it on several recent models, but this one is a bit more refined.

The minimalist “raindrop” design of the camera was a highly-praised part of LG’s pre-launch campaign. There’s one large camera lens at the top, then 2 smaller lenses with a flash below. It’s called raindrop since that reminds of dripping water. It looks neat and it’s unusual in a good way not to have a large camera bump.

Even though the Velvet’s 48-megapixel main camera usually takes decent photos, it sometimes has an issue with over-sharpening and it’s not too competitive in low light. Compared to iPhone 11, for example, the Velvet’s photos lack details and exposure. The Velvet’s cameras aren’t awful, but they’re not excellent either. The quality feels incompatible with the phone’s build quality. It’s definitely mid-range territory.

The Velvet’s Snapdragon 765 processor in general use doesn’t feel like much of a compromise. Everything loads quickly, games run fine, etc. Despite this, the phone somehow seems slow. Maybe it’s because of the 60Hz display or the stuttery scrolling in some apps. Anyway, it doesn’t resemble other 2020 flagship Android phones.

Finally, the Velvet doesn’t ship with a Quad DAC for high-quality headphone performance. But it still has a headphone jack, which is not as great of course, as you won’t get an extra boost.

To sum up, there are lots of things in LG’s approach to Velvet to like. The company is trying something unusual instead of making niche flagships, and that’s a great first attempt at a remarkable new design. Sadly, it fails in a few key areas, but we can expect more experiments with forms now, which is definitely exciting.