Is Triller Going to Be TikTok’s Main Competitor? 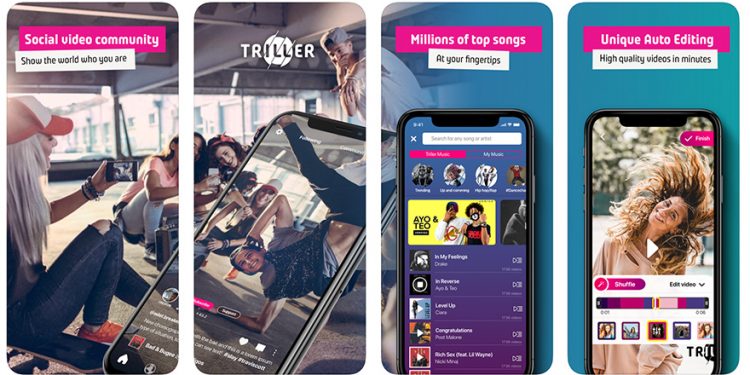 The app which quickly climbed atop the App Store and Google Play rankings, Triller is one of many social applications centered around creating short videos, similar to Instagram Reels and Byte, which started to appear because of TikTok‘s popularity.

However, when the US President Donald Trump said that TikTok might be banned from the country recently (read this article if you want to find out more about the app’s problems and prospects), Triller started the aggressive marketing campaign in which they labeled the app the ‘adult version’ of TikTok. In its press release from the beginning of August, the company announced that Triller had managed to become the most downloaded application in the App Store in 50 countries, among which was the US.

What even is Triller?

Similar to TikTok, this app is connected very much to music, especially Hip-Hop. Users can record several short clips, and then the app’s going to use AI to make them look like professional music videos, according to the developers. They also claim that the service is used by such celebs as Eminem, Cardi B, Alicia Keys, and others.

At the same time, this major focusing on the music sets Triller apart from TikTok. Such famous music industry faces as Snoop Dogg, 21 Savage and others have made investments in the app. This fact is probably even more intriguing for everyone now, that even the app itself.

So they are both similar and different because of the music?

Their strategies are pretty similar, but the companies owning the apps have different methods. Triller aims at letting the users create full songs instead of short clips like on TikTok. Whereas TikTok is very diverse and doesn’t seem to be prioritizing creating music all that much.

However, the difference is not as striking as Triller executives want it to be, as, after the recent updates, users can also make short clips very similar to those from TikTok.

Was it just created?

Triller saw that TikTok is facing problems right now and used this opportunity. However, it was created 2 years earlier than its rival in 2015. The company has gained a substantial amount of investments from a number of companies in the entertainment industry, which led to its becoming more and more popular.

Are there any influencers on Triller?

It’s too early right now to speak about Triller’s influencers, but there are some examples already. Triller has managed to poach a former TikTok star Josh Richards (he had more than 20 million followers there). They went as far as appointing him Chief Strategy Officer. Other popular TikTokers switching to Triller include Noah Beck, Anthony Reeves, Griffin Johnson, and others. However, the majority of influencers are afraid to lose their subscribers, as TikTok still outweighs Triller in the user count by a lot (65M active users against 800M).

What is the commercial model of Triller?

This is yet another sphere where TikTok and Triller are different. While the former uses ads for revenue, the latter is all about allowing influencers to raise money from advertisers, partnerships with labels, etc. The full monetization feature was announced in the beginning of August, along with the opportunity to go live.

We can say for sure right now that whether Triller will become popular in the years to come will probably depend on their ability to build an efficient and viable commercial model that is suitable to the influencers.

Even though the circumstances are favorable for TikTok’s rivals caused by its ongoing battle against the US administration, Triller’s developers have to use the opportunity smartly to become truly successful.

How TikTok’s Purchase Will Change the App, And Will It Even Survive?