iPhone 12 Pro vs Samsung Galaxy S20 Plus: Which one should you buy? 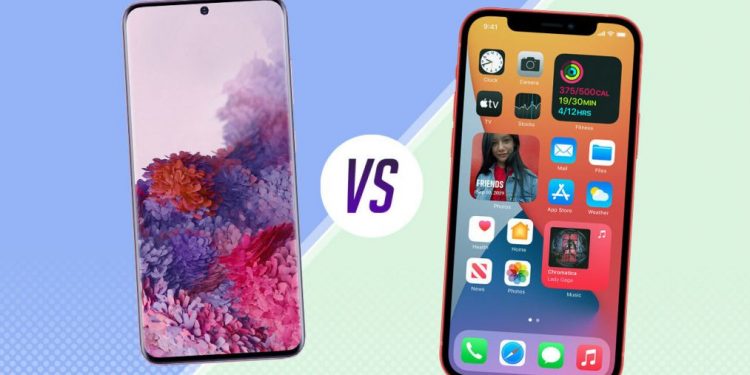 We tried to compare these two flagship devices and differentiate them. Which, in the end, turned out to be a fascinating clash. Both phones have similarities, with the iPhone 12 Pro being beaten by the Galaxy S20 Plus in some areas and vice versa. So let’s get into this!

The Samsung Galaxy S20 Plus has a glass back with metal sides. With a resolution of 3,200 x 1,440, it has a wide 6.7-inch Dynamic AMOLED display. The screen has a slight side curve and a strong refresh rate of 120Hz for smoother animations and better gameplay when playing 120Hz supported games. There’s a small punch hole for the phone’s front-facing camera on the top of the screen. It also has a reader for in-display fingerprints. It can be purchased in the colors of Cloud Blue, Cosmic Black, Cosmic Gray.

On the other hand, there is a smaller 6.1-inch 2,532 x 1,170 display on the iPhone 12 Pro, and it still has a huge notch on top of the screen for its front-facing camera. The phone does use a new type of glass cover, however. It is called Ceramic Shield, which uses a modern manufacturing approach that integrates nano-ceramic crystals into the glass. Compared to previous iPhone models, this is expected to provide better protection against drops. A stainless steel chassis is also provided for the iPhone 12 Pro. It comes in Silver, Graphite, Gold, and Pacific Blue colors.

For the US and a few other markets, the Galaxy S20 Plus has the Qualcomm Snapdragon 865 processor inside. It utilizes Samsung’s in-house Exynos 990 chipset in other parts of the world. While, the iPhone 12 Pro uses the company’s newest in-house processor, the A14 Bionic chip, like all of Apple’s other iPhone 12 models. It was manufactured using a manufacturing process with 5 nm. It has a six-core Processor, a four-core GPU, and a neural engine chip with 16 cores for better machine learning performance. In our full analysis, we will have to see how the phone performs against the Galaxy S20 Plus in benchmarking tests once we get our hands on it.

When considering the connectivity, low-band and mmWave 5G networks are facilitated by the iPhone 12 Pro only in the US, but not in the rest of the world. With the Snapdragon 865 chip, the Galaxy S20 Plus supports both sub-6Ghz and mmWave 5G networks worldwide. The Exynos 990 chipset version, which sold outside the US, just supports 4G networks.

The Galaxy S20 Plus has a battery of 4,500mAh and ships with a wired 25W charger. It also supports 15W wireless charging, if you want to charge things such as earbuds or even another phone in a pinch, along with 4.5W reverse wireless charging.

We don’t know the battery size of the iPhone 12 Pro yet, but we know it’s got a new feature called MagSafe. It is used for a new accessory class that uses magnets that connect the iPhone 12 models to the rear. That means that accessories like cases, wireless chargers, and more all connect to the back of the phone magnetically. That said, the latest iPhone 12 lineup doesn’t come with a charger in the package, and if you don’t already have one at home, you’ll have to pay $20 for an Apple-branded charger.

Both the Galaxy S20 Plus and iPhone 12 Pro are powerhouse phones on paper.

We still don’t know how much RAM the iPhone 12 Pro has inside, but the Galaxy S20 Plus has a mountainous 12 GB of RAM. The version sold by Verizon, which supports its Ultra Wideband 5G network, is one oddity. It only has 8 GB of RAM, for whatever purpose.

The iPhone 12 Pro features a wide 12MP sensor, an ultra-wide 12MP camera, and a rear 12MP telephoto camera. The phone also includes a rear LiDAR scanner, which is used to record information about the pixel depth. This, along with improving AR experiences and Night Mode portraits, is intended to reduce capture time for images and video clips. The phone has a front-facing 12MP camera as well. With HDR and Dolby Vision HDR support, it also supports recording video at 60fps.

In addition to an ultra-wide 12MP sensor, the Galaxy S20 Plus has a main 12MP camera on the back and a massive 64MP sensor for its telephoto lens that supports up to 3x optical zoom. We were really impressed with both its hardware and software camera characteristics in our analysis of the handset. Also, this provides 8 K video recording support as well.

No matter which one you pick, both will take amazing shots. Camera software from both companies is well designed out of the box, even without a massive 108MP sensor like the one used in the Galaxy S20 Ultra.

Apple’s latest iOS 14 out of the box comes with the iPhone 12 Pro. It involves new features such as widgets on the home screen of the phone, along with the App Library that helps to organize the apps of a user better. It also adds support for watching videos or making FaceTime calls with picture-in-picture support while continuing to use another phone app. Apple has an outstanding OS update record, so before you need to trade it in, you can expect to see a range of big iPhone 12 Pro updates.

The Galaxy S20 Plus comes with Android 10, with Samsung’s in-house One UI skin. The skin has been made incredibly customizable by Samsung, so you should be able to make it your own. One UI, however, can still get bloated with in-house applications pre-installed by Samsung. With this handset, Samsung has promised to include three years of Android OS updates.

However, it is still up in the air when those updates will be released. A few weeks ago, Android 11 was launched, but so far, Samsung has not announced when the phone will get it.

When pre-orders commence on November 6 in the US, the iPhone 12 Pro will have a starting cost of $999. Earlier in 2020, the Samsung Galaxy S20 Plus was launched in the US with a price tag of $1,199. The unlocked price of the phone has decreased since then. You could purchase the phone for $889.99 during Amazon Prime Day. In November, as part of the Black Friday 2020 sales, we expect the price will also be discounted again.

Samsung Galaxy S20 Plus vs. iPhone 12 Pro: Which phone should you purchase?

In our analysis, we mainly praised the Galaxy S20 Plus, even recommending it over the more costly Galaxy S20 Ultra. It is extremely well-rounded, and its rather high price tag is worthwhile. We have yet to test the iPhone 12 Pro, but the Galaxy S20 Plus beats it in a couple of areas on the paper. With 120Hz support, it has a larger display and supports reverse wireless charging, and you can also add additional storage via microSD to the Samsung phone. For getting a very, very wide notch on top of the device, the iPhone 12 Pro also loses points.

In 2020, both Samsung and Apple have upped their game.

However, you can still get the iPhone 12 Pro with a significantly lower starting price than the Galaxy S20 Plus. It also has an OS that clients can rely on to be easily modified. For the phone, the A14 Bionic chip is also likely to be a very fast processor. Finally, when compared to the cameras on the Samsung handset, Apple’s camera hardware and software should not be underestimated. Iphones are always one of the best smartphone cameras on the market, and we don’t expect them to be any different this year.

In the end, to see how it really stacks up against its close competition, including the Galaxy S20 Plus, we’ll have to wait for our full review of the iPhone 12 Pro. Both of the phones come with their pros and cons, though. We’ll find out how they compare in actual life really soon.