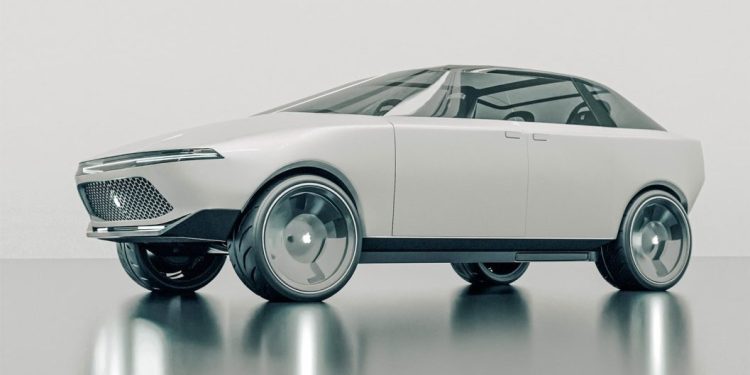 Rumors about an Apple Car continue to surface, demonstrating Apple’s apparent interest in transitioning beyond smartphones, tablets, and computers to electric vehicles. While Apple does not appear to be close to releasing its own automobile, Vanarama, a car-lease company located in the United Kingdom, has designed an Apple Car rendering to add to the mountain of rumors.

It’s typical for U.K. corporations like this to publish vehicle designs for marketing purposes, which is why a leasing firm is speculating on an Apple Car. Vanarama claims that this drawing is based on genuine Apple patents, but it still doesn’t give a good sense of what a genuine Apple electric car might look like.

The design shows an electric vehicle with an SUV coupe body shape that combines a high riding height with a low roofline. That is consistent with previous production EVs such as the Ford Mustang Mach-E, but there is no evidence that Apple will adopt this shape other than the fact that it is popular among vehicle designers at the moment. Even if it did, Apple would simply be following auto industry trends rather than offering something novel or unique.

Some design elements, however, conform to Apple patents. There is no middle pillar between the front and rear doors, hence the car has rear coach doors (also known as suicide doors). This configuration was originally employed on luxury vehicles, but it was discontinued due to the loss of structural stiffness and crash protection. Apple filed a patent application in 2019 detailing how it planned to account for this by inserting diagonal support sections in the doors, while a second patent application filed around the same time proposed leveraging the floor to boost structural integrity and absorb crash pressures.

The cabin has a large display panel that spans the entire dashboard, similar to what we’ve seen on the Byton M-Byte concept and the Mercedes-Benz EQS. The hypothetical rendering suggests a fully configurable display and Siri integration, which don’t seem too far-fetched given Apple’s primary skills.

Reports of an Apple automobile development, dubbed Project Titan, date back over a decade. Initial stories emphasized autonomous driving or an entertainment system leveraging Apple’s smartphone skills as the outstanding features, while more current sources indicate battery technology will be what distinguishes the Apple Car.

It has been reported Apple has been in talks with Hyundai and Kia earlier this year about producing the automobile, presumably at Kia’s West Point, Georgia, plant, but those talks appear to have ceased. According to an April rumor, Apple has begun talks with LG Electronics of Korea and Magna of Canada to develop the car. Magna has a contract manufacturing operation that includes the Jaguar I-Pace and the future Fisker Ocean, while LG is a key supplier of EV batteries. However, according to an October rumor, Apple is negotiating a battery supply deal with Chinese giants CATL and BYD.

An Extremely Rare, Apple-1 Computer Was Just Sold for an Astounding Price